Update on Continuing Education Credits at the Ross Chapin Event

For all those interested in attending the Ross Chapin "Pocket Neighborhoods" event held in Asheville on Monday, November 5, 2012 from 6:00pm to 7:30pm, we have now been approved for AIA Continuing Education credits.  See the original post for more information.
Posted by Unknown at 10:41 AM 10 comments:

Yarnbombing Appears in the Block 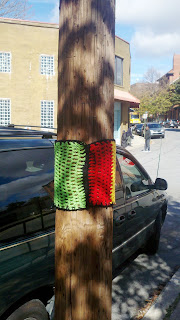 So I've previously heard about the concept of "yarnstorming" and "yarnbombing" on various placemaking and city-centered websites, but I've never seen it manifested in reality.  I ran across the at Triangle Park on the Block in Asheville yesterday.  Just for reference, Knit the City provides the following definition:

"Yarnstorming (also known as yarnbombing): the art of enhancing a public place or object with graffiti knitting" (Or putting knitting on something unexpected in public and running always giggling wildly).

I found it an interesting way to inspire conversation and to add some texture to the built environment.  It's interesting how such a subtle effort can make you a second look at a place.  Check out the map below if you want to go witness it in person (it's the pole just south of the corner of South Market and Sycamore, on the Sycamore sidewalk). 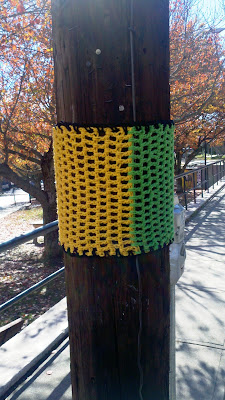 View Larger Map
Posted by Unknown at 8:05 AM 2 comments: 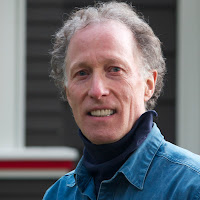 Author of the book Pocket Neighborhoods, Ross Chapin, will host a workshop in Asheville, North Carolina on November 5, 2012 (from 6:00pm to 7:30pm) at the Lord Auditorium in the Pack Memorial Library located at 67 Haywood Street in downtown Asheville.

On his website Chapin describes pocket neighborhoods as, "clustered groups of neighboring houses or apartments gathered around a shared open space — a garden courtyard, a pedestrian street, a series of joined backyards, or a reclaimed alley — all of which have a clear sense of territory and shared stewardship. They can be in urban, suburban or rural areas.

These are settings where nearby neighbors can easily know one another, where empty nesters and single householders with far-flung families can find friendship or a helping hand nearby, and where children can have shirttail aunties and uncles just beyond their front gate."

During this workshop, Chapin will offer a presentation on this topic for professionals and the general public, sharing stories of communities from around the world, their historic precedents, and the key design principles that give them vitality.

This event is open to the general public.  The sponsors for this event include the Carolinas Chapter for the Congress for New Urbanism, the Asheville Design Center, Urban Times, and the North Carolina Chapter of the American Planning Association.

Professional continuing education credits are available for CNUa.  Credits for AIA and AICP are pending.

For more information about this event contact Josh O'Conner via e-mail josh@localplan.org.
Posted by Unknown at 5:52 AM 4 comments:

The Man Who Planted Trees

Crass individuals who associate their environmental drive and vision with a near-death experience brought on by alcohol withdrawal don't necessarily fit within modern paradigms of heroes. Especially not heroes hailing from the modern day sustainability movement, yet David Milarch is poised to play a critical role in maintaining the planet's biodiversity. Jim Robbins (a frequent science contributor to a number of publications including Smithsonian, Audubon,Scientific American, and The New York Times) follows Milarch on his quest to clone the world's champion trees thus preserving the genetic legacy of our ancient forests in his latest title, The Man Who Planted Trees: Lost Groves, Champion Trees, and an Urgent Plan to Save the Planet.

Moving beyond his interesting past and connection in his mission to save the world's forests, Milarch is engaging in an innovative and potentially groundbreaking grassroots effort to ensure that our lack of foresight doesn't result in a world deprived of quality forests. The premise behind Milarch's effort is simple, by preserving the genetic material of ancient trees (through cloning) the world will have better supply of genetic material and forests may be able to be restored using the exact genetic code that allow trees to emerge as "champions" (champion being the term used for those trees which are the largest or oldest representatives of a given species). Milarch worries about the challenges that global warming will bring as weather patterns intensify and hopes that by preserving genetic material that has weathered a rather tumultuous past will provide us a better set of tools for preserving forests.

Robbins does an excellent job of following Milarch's efforts and showing how Milarch (and his family) were willing to undergo rejection as well as resistance from some of the world's preeminent environmental organizations to bring a vision to life. In my opinion (as someone who's always considered trees to be the kings of the plant kingdom), Milarch's work is outstanding. While it may not sit on the most scientifically justified foundation, I think there is some ethical justification in helping to save tree species which wouldn't be as bad off if it weren't for our assistance. Robbins also delivers a robust scientific narrative involving our ever-evolving understanding of plants which shows that perhaps our previous conceptions of trees may have been woefully simplistic.

The Man Who Planted Trees: Lost Groves, Champion Trees, and an Urgent Plan to Save the Planet engages the reader on a variety of levels and offers an interesting look into the mechanics of what it takes to protect biodiversity. David Milarch is an interesting and oft-inspiring character that reminds us that drive and vision are the real key to making the world a better place.

This article was originally posted on Urban Times where Josh is the Senior Editor for the Built Environment Section.
Posted by Unknown at 7:21 PM 4 comments:

Getting to Yes: Negotiating Agreement Without Giving In

The premise of Getting to Yes is relatively simple; in essence the traditional view of negotiation (as a game of “give and take” between parties) is largely unproductive and can shatter working relationships between parties. Under this traditional view, parties are forced to choose between hardline negotiations (where you attempt to force your desired outcome) and softline negotiation (where you make extreme concessions in order to preserve the relationship). The authors offer a new outlook (referred to as “principled negotiation”) where all parties work to make objective and rational statements about their desired outcomes (including providing empirical reasoning for their desired outcome). This new approach (summarized in the Appendix) removes the oppositional/adversarial outlook of negotiation and works to find creative solutions which satisfy the needs of all parties involved.

The model proposed is easy to use. The first step involves detaching personal politics from negotiation. Through making the negotiation about the issue at hand, the authors claim that relationships are more likely to be preserved regardless of the outcome of the negotiation. A major element of removing personal politics from the negotiation is to focus on personal interest rather than a hard position. Expressing personal interest in more lucid terms rather than abbreviated and absolute terms (e.g. “I would like to be able to sell the house and have a capital gain that would allow me to put 20% on house X” rather than “I would like to get $160,000 for the house”) allows both parties to understand the interest at play and to work to explore mutually beneficial outcomes. In addition to expressing personal interests, the authors also insist that the terms of the negotiation be expressed in objective terms (i.e. when negotiating the house price an offer would be based off of the same quantitative/qualitative comparisons used in an appraisal). Instead of throwing out arbitrary figures in order to whittle a party up or down, each party must justify their request with some particular objective fact.

As the authors conclude the book, they provide a set of “Frequently Asked Questions” that they’ve received since publishing the first edition of the text. Each of the questions delve into more specific detail regarding how to employ the techniques in situations where power imbalances may be at place or one party simply refuses to negotiate.

Overall, the authors use the bulk of the text to compare and contrast traditional negotiation styles with their proposed “principled” negotiation technique.  I've included the books main headings to provide you with more of a flavor for the book.